Well that's autumn just about done and dusted. Hard going with the lack of any notable east wind so not a vintage one. Might just be time for a big rare yet but not much time left, not quite all over but there are some people on the pitch.
Had a great morning out at Start Point last Monday ( October 30th ). seemed to have the whole place to myself, not another soul around. Vis mig was poor, best birds were 3 Bramblings and 5 Lesser Redpolls. Been a good autumn for Lesser Redpolls and not bad for Bramblings. Bullfinches also good but I have not seen any decent flocks of Chaffinches going over yet and I must be the only birder in the country to have missed out on Hawfinch so far. Also saw 3 Reed Buntings, one had ring bling and bearing in mind a bird was controlled at Portland this week that was ringed in Norway maybe this bird was a distance traveller to.
Had a good wander around Mattiscombe Beach. Loads of seaweed thrown up but could not find anything much apart from a Portuguese Man 'o War which is seemingly obligatory on every strandline at the moment. There is a bench above Mattiscombe dedicated to ' Naturalist and Ornithologist ' John Barlee. I believe he was a career naval man who spent some time at Dartmouth Royal Naval College. I have a book he wrote called 'Birds On The Wing'  published in 1947. I have wondered what he used to see at Start, probably saw nesting Red-backed Shrikes, plenty of Turtle Doves spring and autumn, possibly Corncrakes but never a Yellow-browed Warbler.
In the afternoon went down to Charleton Marsh for the first time in a while. Definatly changed to winter with some calling Water Rails and a good count of 50 Teals. 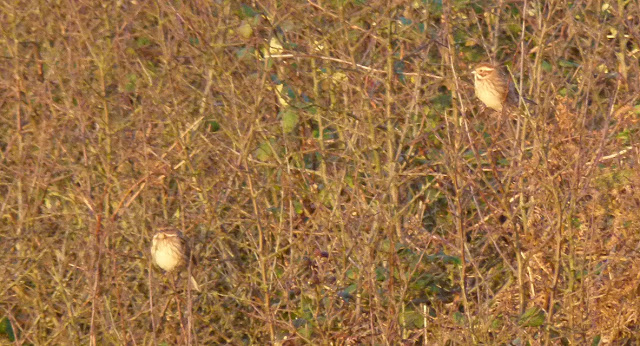 The right hand Reed Bunting was ringed and may have come a fair way. 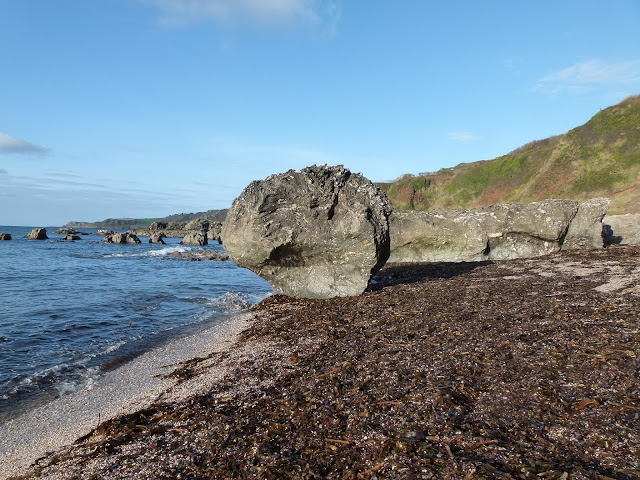 This boulder on Mattiscombe Beach is about 10' high and takes everthing the ocean throws at it. 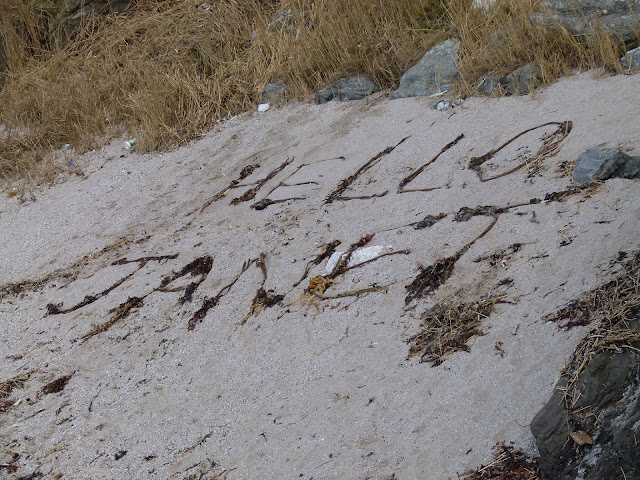 Hello Janet, whoever you are. 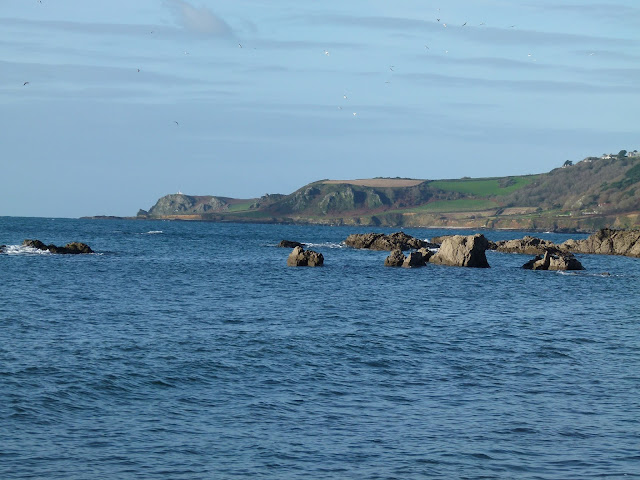 View southwest from Mattiscombe. Distant headland is Prawle Point with the coastguard look out on top. Right hand side is Maelcombe House above the cliff and Hines Hill, East Prawle above the woods. 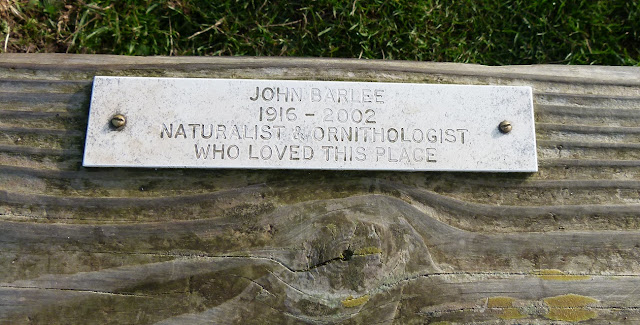 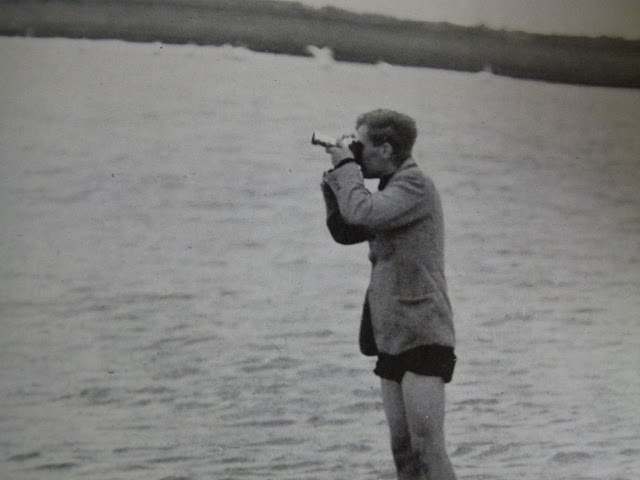 Photo of John Barlee, from his book ' Birds On The Wing '

On Friday I was back out at Start first light. Again the vis mig was disappointing with the exception of Brambling which reached double figures. Small numbers of birds going in all directions with little purpose. I think as Start is a headland with a prominent projection birds sometimes do this here as if they are not sure what their next bearing should be. On normal clifftops they seem to head and stay in one direction. Sometimes at Start they just keep going low over the car park and these are the best days. There was to be a big highlight and surprise however when at 07:30 I got onto a Spoonbill,  well offshore and high above the sea going north. Could have been so easy to miss that you wonder just how many birds like this go through unseen. Ignorance is bliss. I would be surprised if anyone has got Spoonbill onto the Start list before now but I know there have been similar records from Prawle Point before. 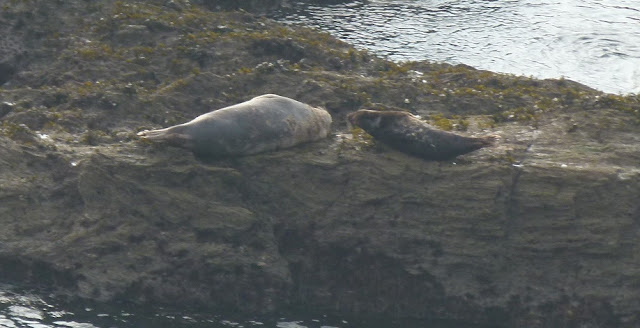 Chill time for a couple of Grey Seals on the Sleadon Rocks last Friday.

Went to Start first light this morning but it was windswept, grey, unwelcoming and had a feel of being devoid of birds so I headed for Slapton Ley to see if I could catch an early rising Bittern from the bridge. There was to be better than that though ! Firstly it was nice to see a big flock of around 10000 Starlings heading south behind the ringing hut. I got sight of them late and presumed they had left their roost in the reeds at Strete Gate or somewhere in the Gara Valley. Looking back up the Higher Ley a bird was flying south which looked like a Cormorant. Putting my bins on it I could see it was nothing less than a Glossy Ibis, brilliant. It even called a couple times which was new to me. Unfortunatly I could not age it as I followed it down towards Torcross. Like the Spoonbill, could have easily been missed. This is possibly only the second modern record for Slapton Ley, the last in October 1986. There is an old record of 2 shot here in 1837. In November 1981 as a teenager I had a Spoonbill fly over me whilist stood on Slapton Bridge. It was a special moment for me because it was the first rarity of sorts I had ever found myself. It might still be the only Slapton record. The status of Spoonbills on the 10k patch has never changed much. Perhaps not quite annual. Glossy Ibis, Little, Cattle and Great White Egrets were big rarities then. The latter have all gone from 'county megas' ( certainly for Glossy Ibis, Great White Egret and Cattle Egret ) to just  'patch gold ', if that. Who would have thought that by now Spoonbill would be by far the rarest of them all.
What was meant to be a quick look from the bridge turned into a longer stay as there was a good movement of Woodpigeons going on heading anything between south-southwest. by 09:45 6800 had gone through, the largest flock about 700. Finches were few but included 2 Bramblings and 11 Lesser Redpolls including a flock of seven. Also seen below the bridge a couple Kingfishers, Firecrest and a little Egret flew through. What a great few hours. 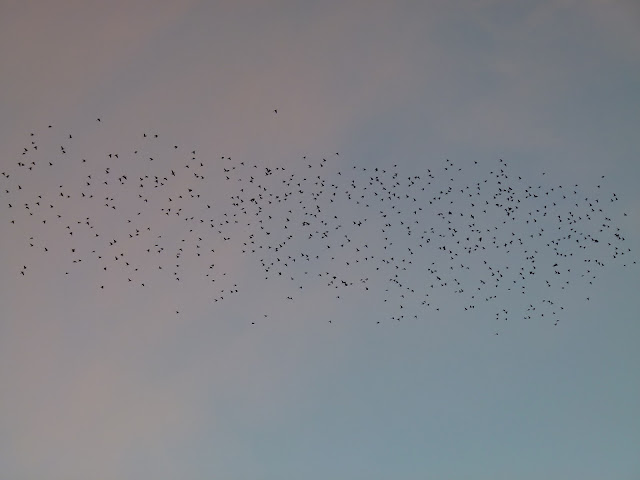 It ain't over for Woodpigeons yet.